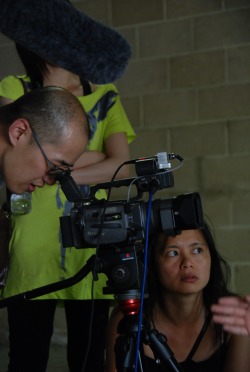 There is such a thing as a mid-air me.

Liya trained as a performer and theatre deviser in LISPA (2004-2006), a Lecoq-based physical theatre school. Before that, she was an accidental industry journalist for 3.5 years in Taipei reporting on the Telecom, Security and Electronics sectors.

In London when she was not rehearsing or writing, she was teaching Chinese to children and working part-time as a Chinese/English translator and volunteer Yoga teacher. Her other work experience in London included a short stint as a butcher's assistant,  baby sitter, conservation worker, bar tender, waitress, drama workshop facilitator.


She once had a little affair with filming too:

Liya received her film and documentary training from Full Shot Image Company (Taiwan). She then made her first documentary with her sister Huiling about a former Comfort Woman, Lu Man-Mei, commissioned by Taipei Women's Rescue Foundation. Occassionally, just for her own amusement, she likes to stay behind the camera and enjoy the thrill and challenge of shooting short films without the sweat of post-production editing, which means, you edit as you film.

Her first full-length play, Mr Whippendale, was invited to perform in the National Theatre of Bruges of Belgium for two weeks (Aug 2007). The play later won Arts Council funding for EAST Showcase in Soho Theatre (London). More info on Mr Whippendale can be seen on http://liya.burntmango.org/current.html. She has since been focusing on writing and directing plays mainly. Her second play, Cherry or Burgundy was developed with generous support of rehearsal space from Young Vic, London.

Outside London and and Taiwan:
She worked on a theatre-aid project in Ache, in Tsunami-affected areas, by way of theatre. Projects include theatre training for local charities and drama workshops in a local mental hospital. (Summer 2005)
While on a one-month Yoga teacher training course, she also conducted a drama workshop in a primary school in Rishikesh, India. (2008)

Liya had worked with the Paperwindmill Theatre running drama workshops as part of the theatre aid programme for children in areas affected by the Morakot Typhoon (2009). She had also headed a summer actor training workshop for Apple Theatre (2010).

As an aside, Liya's proudest achievement in 2010 was to have nurtured a stray, paralysed and incontinent Golden Retriever to full recovery within 4 months.


Between 2009 and present:
Liya works as a freelance theatre director and actor and translator. Occasionally, she teaches drama to high school students.

For the year ahead (2013):
Liya will continue to work with her body, experiment with writing from the body, for the body. There is a wild world out there waiting for her to discover, via her body.

"As an actor on the stage of life, please give me a clear stage direction to work with, something concrete, something solid that my body can execute. Give me verbs, not nouns, not concepts.
So her request was one day answered (by the universe):

Listen, and pick up the clues, Wu."

For now, she maintains:
The body knows.

More details on Liya's past work can be seen on her CV.

Here is a short production footage of a play directed by Liya. The actors are a group of teenagers and adults with learning difficulties. http://www.youtube.com/watch?v=nTYjbonZOPo

For more of Liya's writing samples, please go to http://liyawu.blogspot.tw/

For other work sample, please go to the Videos & Images page for production rehearsals and performance pictures.